And is this the end of the very odd case of Richard O’Halloran and the Irish Government?  Will we every know why they were so lax in getting him home?

– Mr O’Halloran is home now in Ireland after “lengthy” and “closely-guarded negotiations” between the Irish Department of Foreign Affairs and Chinese authorities.

To understand the saga please start at the end of this page as updates are added as we find them.

16 Jan 2022 – Wife of detained Richard O’Halloran wants Coveney to travel to China –  Richard O’Halloran, a 46-year-old father of four, has been blocked from leaving China since February 2019 over a legal dispute involving a Dublin-based aircraft leasing firm he works for. – 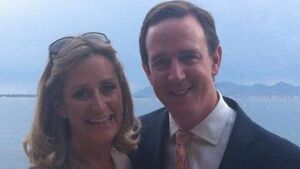 6 Jan 2022 – Family fear Dublin dad trapped in Shanghai wont get home this year – Mr O’Halloran went voluntarily to China in March, 2019 to meet investors and discover what had happened to CALS Chinese parent company. After a week of business meetings in Shanghai, he was detained at passport control at the airport as he tried to board his flight back to Dublin. After several police interviews, he was issued with an exit ban and has been stuck in China ever since.

Feb 2021 Simon Coveney asked Brian Cowen to cancel a proposed discussion in the Irish Seanad to examine Richard’s case…now why would he do that?

Shame on Wang Yi for inviting ⁦@simoncoveney⁩ over yet not resolving ⁦@SaveRichardNow⁩ RICHARD OHALLORAN’S detention. Total embarrassment for Ireland and its citizens. We cannot and should not engage with countries which withhold our freedom! https://t.co/L8MPlx0pWN

I cannot fathom how ⁦@simoncoveney⁩ has not travelled to meet Wang Yi already to specifically discuss RICHARD OHALLORAN’S release. How can you have abandoned my brother and hence all Irish citizens so badly? This is a travesty. A family ruined https://t.co/ln4r96vsZc

Taoiseach calls for release of journalist in Belarus? What about demanding release of Irish national RICHARD OHALLORAN? Focus on our own people rather than joining other bandwagons!!! Richard is being forgotten!!! https://t.co/bMaJv3w0kw

Senator McDowell said that he was intending to put forward a motion to debate Mr O’Halloran’s case. However, he was contacted by Foreign Affairs Minister, Simon Coveney, and asked to not debate the issue as it is “at a delicate stage of negotiation”.

The Chinese embassy said more than 7,000 Chinese nationals have lost €160 million from money “illegally collected from the public” in China in a crowdfunding scheme and that about €50 million was transferred to CIALS to buy the Airbus A330 aircraft.

5 Dec 2020 – Lesson here for anyone thinking of going to China – Family of Irish man held in China: ‘Nobody is helping us – we are just begging for help’

23 Nov 2020 – Why is the Irish state not doing more to release an Irish citizen held against his will in China?  GRIPT (Best article)

CNCALS.com, which was taken offline after Airfinance Journal made inquiries about the website, published a now-deleted press release in January 2018 saying the company had leased an Airbus A330-300 purchased through crowdfunding to Finnair.

Huijbers says that press release is incorrect. Finnair also confirms it does not have any aircraft from CALS.

Are you thinking something is not quite right?